They might also find something unexpected: five goats with pack saddles following docilely behind Dick Carkner.

Stitches, Inky, Lightning, Rambo and Thor are pack goats raised by Carkner to help carry gear during hiking trips. They follow behind Carkner, over trails and across country, hopping over gullies and displaying the athleticism their species is known for.

Carkner raised all five by hand, bottle-feeding them as kids, which is an important step in raising a pack goat, he said. 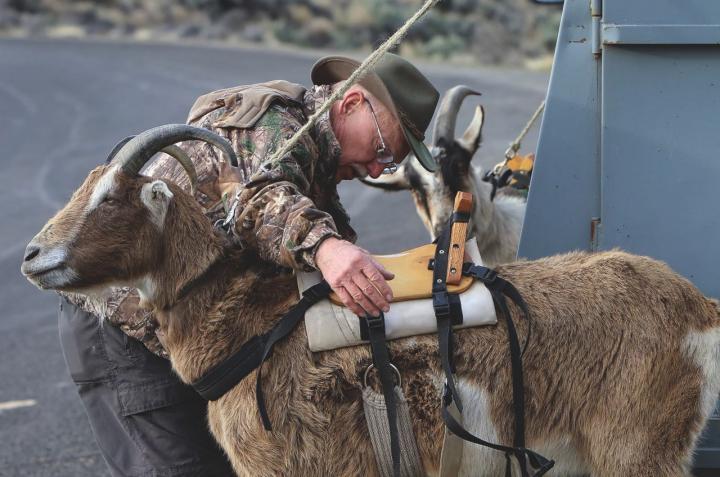 “It doesn’t take much training, the main thing is to have them properly socialized,” he said. “It’d be hard to find adult goats that have what you need.”

A good pack goat is well socialized and comfortable around people, which allows a pack goat handler to strap the saddles on to them without much fuss.

“You’re their mother, parent, dad, whatever,” he said.

Goats are naturally inclined to herd and will stay grouped together and follow their handler by instinct. Well socialized goats will be comfortable around humans. It can be a bit of a challenge when Carkner runs into other people out on the trail, though.

“I’ll stop and get talking to some people and then we go to move on, I look back and I’ve lost a goat,” he said, laughing.

Carkner began raising and working with pack goats a decade ago after being introduced the practice by his son. Since then, he’s had a number of goats. Inky, Lightning, Rambo and Thor are his newest group. The four are 3 years old, born in the same year and have just reached their prime.

Stitches is an older goat, 10 years old, and is the boss of the group.

“It’s a very distinct pecking order,” Carkner said, with the hierarchy being decided between the goats themselves.
When out hiking, the goats will typically follow in the same order every time, with the boss goat in front and the rest falling into their spots behind. 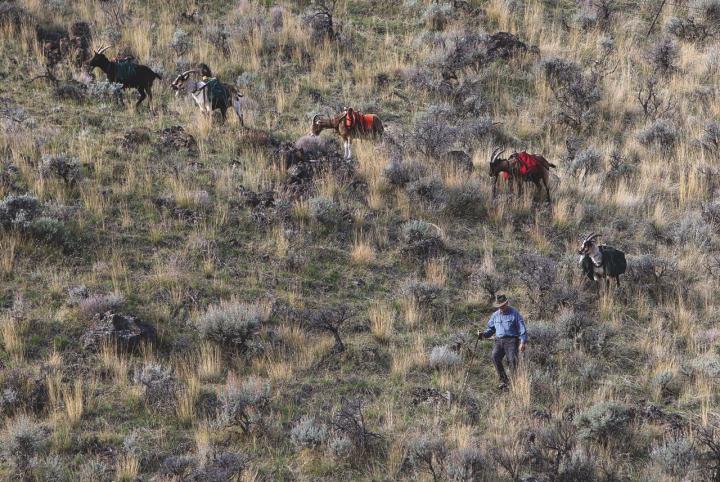 Besides their natural inclination to stay grouped together and follow their handler, goats are well suited as pack animals due to their natural athleticism.

“They can go places that wouldn’t be safe for a horse,” Carkner said.

Goats are also similar to deer and can graze on more plants than a horse could and don’t require as much water. Each adult goat can carry up to 25 percent of its body weight, which usually is around 50 pounds. However, Carkner usually keeps the loads to about 30 pounds.

The loads are put into specially designed saddle bags that attach to goat-specific saddles that are strapped into place on the goat’s back. They are designed to stay in place when going over steep terrain.

The saddles and bags can be found online for purchase through a number of pack goat websites. The practice, while not widely-known, has been around for a number of years and has a strong community. 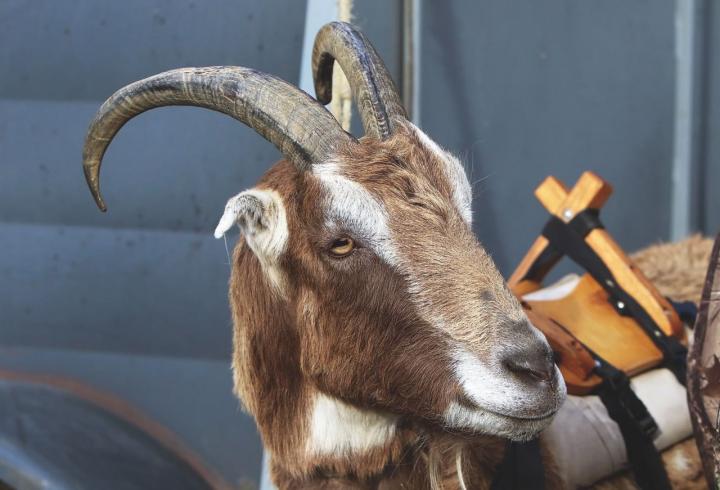 The North American Pack Goat Association was founded in 1999 and works to spread education about pack goats and keep public land open to pack goat use.

A pack goat will typical cost about $200 to purchase from a breeder, Carkner said. In a year, they will typically go through anywhere from $500 to $700 worth of feed and the saddles and gear can cost several hundred dollars as well.

The investment is worth it though, as each goat can continue to hike into their teens, as evidenced by Stitches, who is still going strong at 10 years old.

Goats, like dogs, wiggle their tails when they’re happy, Carkner said, and he sees it often when he’s out on the trail with his goats.

“This is what they like to do,” he said.